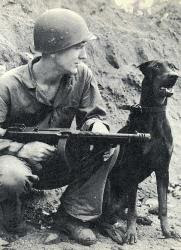 One of the more interesting aspects of Doberman Pinscher history, was the use of this great breed during war times. Dobermans are known for their protective guarding abilities but because of their intelligence and easy trainability they were also found useful for service in the military. 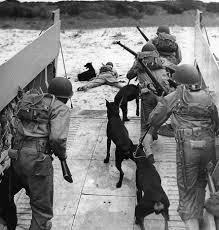 Dobermans were used in both WWI and WWII assisting soldiers. These war dogs were trained to find and rescue wounded soldiers, detect enemy locations and mines, act as messengers, sentries and guard dogs. On another note, there is mention that Dobermans were also used in the war as “suicide dogs”. These dog victims of war were packed with explosives that were remotely detonated once the dog was near an enemy tank. This definitely shows the cruelty, wastefulness and sadness of war.


In WWII the U.S. Marine Corps had their own K-9 Corps known as the “Devil’s Dogs”. (Not the most flattering name for a heroic group of dogs). These dogs received specialized training as messenger dogs to deliver messages, ammunition or medical supplies and sentry dog training to alert handlers of any enemy strangers approaching. These dogs prevented many ambushes as they stood watch protecting their sleeping, tired soldier handlers. Of these Marine War Dogs, 25 died in 1944 at the Battle of Guam.

In honour of these dogs a memorial was created on the island of Guam in the South Pacific. Fourteen dogs were killed in action and others died from exhaustion, tropical illness, heat stroke, accidents, and anemia from hookworm. All were buried in Guam in what is now the first war dog memorial (created by former 1st Lt. William W. Putney, who was the veterinarian for the dogs on Guam). 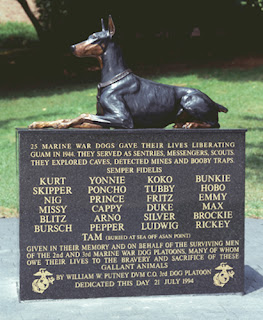 This post is one of my most viewed and is also one that is closest to my heart.  You may notice that this blog about the Doberman Pinscher was originally published back in January of 2011, however, I wanted to re-publish in honour of Remembrance Day in Canada and Veterans' Day in the United States - both of which fall on November 11.

Dedicated to my dad, who I miss every single day.

With love and in remembrance, always  💔


And, sadly I want now to also include in my dedication my beloved Doberman Pinscher Madeline and my mom.  And, my many clients and their pets, neighbours and friends who I lost in 2015.  Miss you all so very very much and nothing will ever be the same without you. 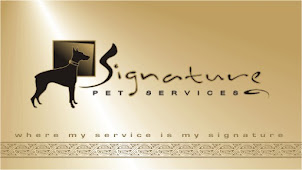